No I haven’t spelt that wrong. It’s how my and Wendy’s friend Krisztian pronounces Volcano. 🙂

I guess I should put a post about our holiday Tenerife. I can honestly say it’s one of the most chilled holidays I’ve been on. Our villa, was stunning and spacious, reminding me how much I prefer them to hotels. Despite me and Wendy being in a sort of children’s room.

We did the usual tourist thing, going up mount Teide (for a mini snowball fight), trips out looking for dolphins, and basically lounging around the pool and beach with ice cold San Miguels. Went to a fantastic waterpark called Siam Park which looks like something resembling an ancient Thai city and boasts the world’s biggest man made waves.

Would’ve liked to stay an extra few days, but I’m not complaining. One bizarre thing to mention is that I bought a beach towel with the image of a 200 euro note on it, and I came home with 200 euros. Law of Attraction maybe? 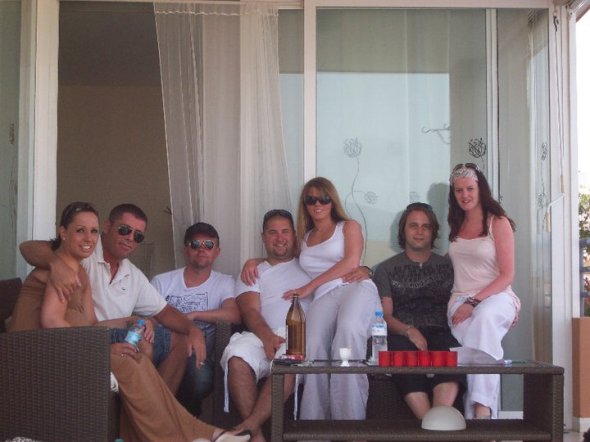 My sister Kel, Tiny, my cousin Lee, Krisztian, Sarah, me and Wendy at our villa.

Also a week later we headed to Cocoon, a techno type day festival in Leeds. Within 5minutes I saw a guard chase down a lad who had scaled the fences to get in – made me laugh. It sounded like the same track to me being played all day but everyone else seemed to notice the shift in song every few minutes. 🙂

Although it’s not really my thing, I love seeing my cousins and their friends, whilst mixing with my own mates there.

Me and my big cousins Wayne and Lee.

This entry was posted on July 14, 2011 by kennydreadful. It was filed under Uncategorized .