…the chains and shackles fell from the red-haired woman, and her two captors quickly jumped back several feet. ‘Kill them all Kaitlyn!’ roared Celeste.

And a massive battle for the Dancescu twins in this one. I’ve always tried to keep this tale a little bit gory and horrific, but I’m not sure if I’ve gone too far with this chapter, especially with it’s ‘Scanners’ type influence.

Anyway, I’m happy with the direction it is going now, and it’s growing into a far larger story than I originally envisaged.

Chapter 9 can be acquired from the page at the top, or here. 🙂

Well I can honestly say it’s been a turbulant yet welcome end to the year in which big changes in my life have occured. I think now more than ever I’ve gained greater faith in my future and allowed myself to ‘let go’ of things which no longer serve me. Time to step into 2014 with my head held high and a wonderful sense of fresh hope.

But enough of that, and more about the work! I’m underway with the character designs for Bloodline Saga, with Sammy’s characters sketched and ready to be done. Also I’ve got lots more planned for Fallen Tears, with new twisted enemies and situations to throw at our determined and vengeful Dancescu twins.  I am even in the process of illustrating a large painting with most of the main characters on it. Once this book is finished I’ll be releasing it for free digitally aswell as print a few copies for whomever wants one. I’m still planning the massive amount of images for Spirit’s Pain. The book itself is just about to be edited. Because this is my most cherished piece of work I don’t want to rush it and screw it up. The last book Spirit’s Fury will be fully penned soon too, leading the way for the next three installments – The Shadoed Brethren.

Along with this, the planned nineteen books for Phoenix await my attention patiently. This could take many many years to write. I’m just glad I won’t be illustrating them ha!

So nobody can say I’ve got no work to be getting on with.

Which brings me to a great little story I was told a couple of weeks ago.

Whilst searching for design jobs, a pal of mine got me a job at her work, as a hotel porter. Obviously this means doing the usual stuff entailed with this role, carrying bags around, moving furniture around and helping guests etc. It’s a far cry from sitting at a desk calmly ploughing through design work, but the change of pace has been great. I’ve enjoyed the experience so far, and all the staff are awesome.

One of the staff, the head porter called David, who is an awesome jovial man and has been showing me the ropes, told me a story of how he came to work at the hotel, and stay in the position for over thirty-seven years. I liked it so much I thought I’d share it on my blog.

For those who know or have been to Blackpool – most will be aware that on the Southern edge of the resort, situated amongst the sand-dunes was a Pontins holiday camp (now sadly bulldozed to the ground). Many years ago David and a pal of his would venture to Blackpool from Liverpool in search of Summer work. One particular Summer landed the pair working at Pontins. Whilst checking in, David enquired where his room key was. He was politely informed that there was no need for a key, as the door was hanging off. Not a great start as you can imagine. So now David and his friend found themselves residing in the staff quarters – affectionately referred to as ‘the jungle’. Apparantly fights between the staff (mainly women David tells me!) happened constantly in the jungle, and the relentless rowdiness caused the pair to leave Pontins in search of alternative work.

As they stepped out onto the road outside Pontins they looked around, debating what to do next. The obvious choice would be to head into the bright lights of Blackpool, as the other direction seemed to be an empty road, with a quiet looking town in the distance (St. Annes! My town if you didn’t know!) But the two decided to flip a coin instead. Heads they turn right and head into Blackpool, where work is pretty much guaranteed. Or Tails, turn left and head down the long sandy road towards St. Annes (they didn’t even know its name at this point).

To cut a long story short, after trekking into St. Annes David ended up working at the hotel I am now, and his friend started working at the town’s Conservative club.

As I’ve said in previous posts, I’m a great believer in quantum physics and this implies that another David landed Heads and went into Blackpool, thus taking his life in a completely different direction and changing his world as well as the lives of everyone at the hotel. I wonder if he found a job as a porter in Blackpool and stayed there for as long as he has in St. Annes.

It just shows that sometimes you need to place your destiny in the hands of fate.

‘Ok, let’s go to Hell then. Let’s destroy that bloody demon, and rid ourselves of this curse once and for all.’

Chapter 7 of Fallen Tears has been uploaded and can be viewed or downloaded here.It can also be taken from the link at the top of the page. 🙂

‘You’ve had this coming for a long time my friend,’ Chantelle whispered. ‘Ever since you bathed that town in blood.’

Another chapter of Fallen Tears is complete – and a fight between two friends of mine.

Or it can be taken from the link at the top with the other chapters. 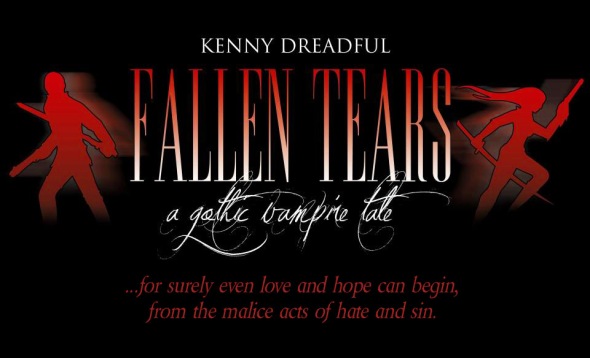